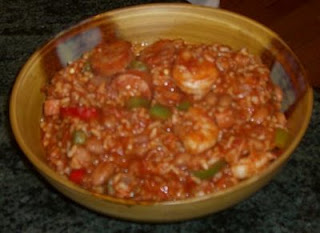 i remember trying to make jambalaya many years ago and i screwed it up so badly, i had to turn it into chili. this time, i completed what i started out to make - a dish with spanish and french influence. most jambalaya recipes i've seen include chicken, but i decided to leave it out and substitute with some other things.

one note, if you don't want to make it as spicy as i have, replace the serrano and jalapeno peppers with something not as high on the scoville scale.

when ready, put it in a bowl and in your belly!
Posted by maharaja at 20:41