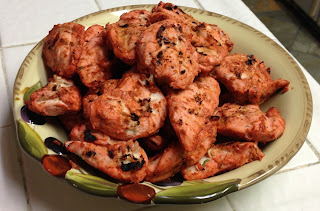 ever since i began this blog, people have been asking me to create indian dishes and there is one in particular that people have asked for. well, thanks in large part to my father-in-law, it's finally here. we started with the base recipe that he provided and amped it up with some zing! this is simple, tasty and just required a little bit of preparation, but it's guaranteed to put a smile on anyone's face... especially those of you who've been asking for something like this.

Preparation:
- slice onion and cilantro and blend into puree
- combine onion/cilantro puree with yogurt, garlic, ginger, tandoor masala, paprika, turmeric, chili, olive oil and salt into large bowl
- place chicken into yogurt marinade and pierce with a fork. let chicken marinate for 5-6 hours, piercing with fork every 2 hours
- after marination, heat up the barbeque and grill chicken pieces
- serve with lemon, juiced over chicken and with rice and yogurt

the ingredients in the recipe are enough for 4 people.
Posted by maharaja at 22:40